In her book, Cinderella Ate My Daughter, journalist Peggy Orenstein discusses how the childhoods of little girls are literally being consumed by Disney's three billion dollars a year moneymaker as every kiddie thing on the planet, from Band-Aids to beach shovels, now has Cinderella’s or Belle’s face plastered on them.

I sympathize with Orenstein, and with the millions of parents whose lives have been infiltrated by tiaras and glass slippers.  While I'm not anti-princess, I have to admit that it does occasionally irk me when a product has been ‘princess-ified,’ especially when it means that my daughter only zeroes in on those items out of a whole selection of perfectly good (and far cheaper) options. Sometimes Cinderella does eat my daughter, but sometimes, I really don’t mind.

As I’ve previously written, we did a good job eschewing most of the holiday shopping craziness this year, and thankfully my daughter did not ask for one princess related item.  However, we were still unsuccessful at avoiding that one required Christmas toddler meltdown over a material item.  But instead of going berserk over a Disney princess, most ironically, what set my daughter off came in the form of a babe in a manger: baby Jesus.  That can’t be a bad thing, you’re probably thinking, but just wait.

Now I’m one who enjoys witnessing how small children instinctively love and adore little babies and dote on their baby dolls as if they were real. I’m also convinced that there is a rule that the smaller the baby or the dolly is, the crazier the toddlers go over them.

And so when my grandmother set out her antique Nativity scene with every character’s gaze anchored by a miniature baby Jesus so tiny he could fit inside a tea cup, I should have foreseen what was coming next.

When I arrived to pick up my kids from visiting grandma’s, my little girl was already waiting at the front door begging to take baby Jesus home. I tried to be clever about refusing her, not realizing how only two hours with baby J had somehow made turning her down equivalent to destroying her life. 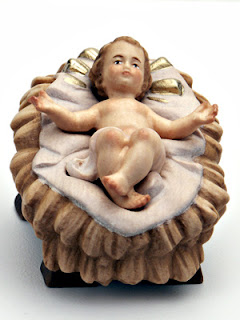 Within a matter of seconds after cheerfully asking her to leave the baby to “sleep in His bed at great-grandma’s house so that we could visit Him again,” I discovered my gross miscalculation.  My daughter had already attached all prospects of happiness to that baby so that nothing, absolutely nothing could ever give her joy again unless she could take Him home right now.

I then realized what had happened: baby Jesus ate my toddler.

Oh, the wailing, oh the shrieking, oh the unrelenting outpouring of devotion to the Holy Infant from my daughter that then followed probably caused all guardian angels present in the room to weep in profound unison!  I therefore did what any, good, staunchly convicted, sticks-to-her-guns Catholic mother would do: I caved.  Her tears disappeared in a miraculous second and she carried all three centimeters of baby Jesus out like a trophy.  Grrrr.

Yes, I thought, let’s take the fragile baby Jesus, small enough to get lost in a jacket pocket or sucked and chewed up mercilessly by a vacuum cleaner, home.  I can hear the sound of little outstretched arms getting crunched now.  Sure, why not? She’s almost four, after all, and completely trustworthy with heirlooms that carry more than half a century’s worth of sentimental value to them.  Of course we should take it home!

After awhile, though, I began to feel guilty.  What kind of monster of a parent would discourage a child from attaching themselves to an effigy of our Lord?  I consoled myself with the knowledge that, hey, I had a toddler who adored baby Jesus!

What's more, I remember consciously thinking that perhaps the figurine might have a positive effect on her.  It was baby Jesus, after all.  Maybe she’d start praying more reverently, sharing with her brother and being more obedient to her parents.  Maybe, for once, giving into her frantic pleadings was a good thing.

Was I right?  Nope. She was absolutely horrible when we got home.   Baby Jesus seemed to have had the opposite effect on her! And so, as punishment, what’s the first thing we took away from her (don’t judge me on this… parents of small kids will understand)?  Yep, we took away baby Jesus.   During Christmas time.  Oh the irony is enough to make a full choir of angles wail almost as loudly as she did.

Now, for the record, before you go and accuse me of bad parenting, we took pains to make it a teaching moment, “Baby Jesus wants you to be good.” etc. and we promised that when she was a good girl again we would give baby Jesus back to her.

Did any of it help?  Yeah right.  She’s almost four, remember?  Trying to reason with her had absolutely zero effect on the impregnable hold that the itty, bitty, poorly swaddled baby Jesus had over her.

For the rest of the evening our household peace was disturbed by a child’s wailings of “I wuv you, baby Jesus,” intermittently erupting from her room with a tone somewhere between tragedy and indignation. It was one of those overly dramatic episodes of grief that toddlers sometimes have, which are so pathetic that you have to bury your face so that they can’t hear or see you laughing.

Just to be clear (before you really start thinking I’m a terrible parent) my daughter wasn’t crying out for baby Jesus because she was being deprived of any access to Him (He’s always with her, and we told her as much) but she was upset because she lost the miniature baby Jesus toy to which she had formed an attachment bordering on mad obsession, and that’s never acceptable behavior in our house.

The good news is that she eventually came around.  She even forgot about baby Jesus and started being a lovely girl again.  When her father and I gave Him back to her, her toddler instincts to lavish love on babies instantly came out. We wrapped Him in a pink washcloth blanket (because He was cold) but didn't feed Him because we figured that was Blessed Mother’s job.  She then ran around the apartment with Him and made her brother kiss Him a bunch of times.

Christmas is almost over and baby Jesus now turns up in random locations around the house.  So far, no vacuum tragedies.  As of right now it would seem that He survived the Christmas season unscathed from my toddler gushing over Him.  And so did we.
Posted by MNichols at 12:44 AM