The other day, purely out of curiosity, I looked up the three religious orders that taught the three generations of American women in my family: my grandmother, mother and myself.  I wanted to know what they are doing now. I came away both saddened over what's become of the nuns that meant so much to our family but I am equally grateful to have spent a good slice of my childhood with them.


My daughter is lucky.  She is one of the few children today who will have the benefit of a teaching order (which is technically a religious institute, though I’m not sure about the difference between the two). The Institute Servants of the Lord and the Virgin of Matara is recently founded, completely faithful to the Church and absolutely exploding with vocations.  They prove that a resurgence of the classic, habit clad, teaching nun is imminent.   They are also pioneers of a new paradigm of religious education as they run the Montessori homeschooling cooperative at our parish. Without orders like theirs, if my daughter had ever asked me if teaching nuns still existed, judging by the dwindling numbers of the older orders, my answer would have been no.  But now, I can safely answer, "Yes, Abigail, there are still teaching nuns."  which my spin on the famous “Yes Virginia, there is a Santa Claus” coined by Francis P. Church in what is the most reprinted editorial in history.

I mean absolutely no disrespect in comparing religious sisters to a commercialized figure such as Santa Claus.  However, not unlike Santa, both are token ‘symbols’ associated with goodness and giving (keep your jokes to yourself), and their current scarcity of presence in Catholic school system they themselves largely founded, may cause us to question whether or not they still exist.

Unfortunately all three of the orders I looked up have absorbed certain ideologies which, I suspect, are at the heart of their slow demise. You may think I’m being judgmental, but I saw everything from pictures of women practicing yoga on mountain tops to links to dubious publications on their sites  (of course, I'm not trying to suggest that every individual nun agrees with the decisions made by her greater order).  And I also saw a few other commonalities shared between them.

For one, the photos on all of their sites show a predominantly elderly demographic.  They all stress their dedication to social justice.  Their numbers are very diminished with largest order I viewed presently consisting of 2,000 sisters and the smallest, a mere 500.   And remember, these are teaching orders, but though all hold “education as the key to alleviating many of the unjust issues of our time,” very few of their ranks, if any, still teach in the classroom.

I compared their websites to that of the completely orthodox Institute to which I linked to above (because they’re awesome) and its like night and day both in content and in feel. One of their first pages has photos of the sisters completely prostrating themselves before the Blessed Sacrament during what I assume is their perpetual vow profession.  Their site is also packed with information about newest foundations, schools and missions around the world, where they, like the poor they serve, also live in poverty. They have links to the next Walk for Life West Coast and a quote from Mulieris Dignitatem in plain view.  Today it is young orders like theirs that are overflowing with vocations, which fills me with so much hope, as well as a bit of sorrow over the older orders.

It's as though the other orders had everything they needed to serve the world: they were steeped with history, talent and the means to do it, but then they traded everything for the world, and we can see now where that has taken them.

We consider ourselves extremely blessed to have nuns based in our parish that are willing to work with homeschooling families.  Perhaps one day religious sisters will again be what they once were: the symbol of Catholic education; pious, counter cultural (and the wearing of a habit usally announces this) and vibrant.  The kind we can believe in, a bit like Santa.

Now I say this because there is something strikingly similar between what Francis P. Church said about Santa in his famous editorial and teaching nuns. A logical substitution reveals this.  Here’s the original text rewritten with the substitutions which are bolded (and my daughter’s name, instead of Virginia):

Yes, Abigail, there [are] teaching nuns. They exist as certainly as love and generosity and devotion exist, and you know that they abound and give to your life its highest beauty and joy. Alas! How dreary would be the world if there were no teaching nuns. It would be as dreary as if there were no Abigails. There would be no childlike faith then, no poetry, no romance to make tolerable this existence. We should have no enjoyment, except in sense and sight. The eternal light with which childhood fills the world would be extinguished.

How true this description is for the religious sisters who taught me (most of them, anyway)!  I remember the love, the generosity, and the element of Divine beauty and enthusiasm that was ever present in my classroom. They truly did foster that original childlike faith mentioned in the quote, because many of them possessed a similar faith.  Yes, their vocation is romantic in the sense of how willingly consumed they allow themselves to be for our sakes.  And without them, indeed, the eternal light of childhood would become ever dimmer. 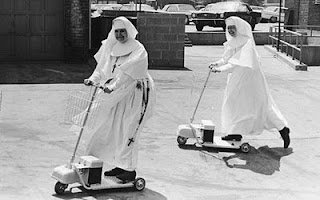 Thank you, to the nuns who filled our childhoods of with love of learning and love of Our Lord.  And thank you to the new institutes who are re-fanning the flame of Catholic education worldwide.  I hope you will stay forever.
Posted by MNichols at 11:08 PM