Babies are Fun… No, Wait, Aargh!

Okay, so I had a baby three months and thirty pounds ago. Which means that I still need to lose as much as my three year old weighs just to get back to “zero” (not the size, mind you.)  And I am flippin’ angry over that.

In fact I’ve been angry a lot lately.  A lot.

Like when the baby is crying in the back seat and won’t take the binky that my daughter is giving him and we hit every single red light and slow driver on the road before we get home - I’ve been angry about that.

Or when a certain national drugstore chain decides to earmark half a dozen spots closest to their front door for stupid “low emissions” vehicles.  Psah! You bet that rubbed me the wrong way as I swung my CO2 emitting dented and cracked American made truck into one of those spots in that “I’m postpartum and I dare you to give me a ticket” kind of way.  I’m still stewing over it, though, and just might boycott the place in a personal rant over the injustice of it all.

Even worse, lately I’ve been angry with my husband over him just breathing.  You know, because for most of the day, he breathes where there’s no scent of soiled diaper, or spit up, or chicken nuggets around.    He called me as I composed this post (which I wrote while nursing, by the way) to say:

“Guess what?  I just got a plenary indulgence!”

Now, perhaps a more pious wife would have been happy for her husband about this, but I went all Dana Carvey on him, “Well, aren’t you just special?” I said.  He was quiet for a second (and, being English, did not understand the reference anyway) before he took his life in his hands by asking, “So what’s for dinner?”

I choked back the angry rant I could have spewed at that moment.  “I don’t know.  What are you cooking?” I asked.  “It’s not my day to cook.” He said.

“Great. It looks like that extra grace is really paying off today.” I said in that way.  He made some comment about me giving up.  I looked at the infant nursing at my breast and said, “Yup.  Given up.  Glad we could both cross this bridge together.  So, see you in a couple of minutes?”

Check and mate.  Score one for the angry gal.

You know, the angry one with a “Catholic mom” blog full with posts that frequently feature poop, domestic rants and homeschooling thoughts, because yes, I now personify every stereotype I always told myself I never would!

At this point you are probably wondering, then why do it?  Why have kids and why do any of it?

I can only respond, because of this: 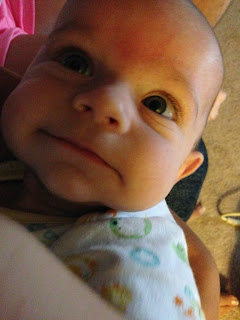 Look at him.  Did you know that he laughs in his sleep?  That when he sees me he lights up like I’m the sun?  That the world was made more complete, and his siblings are I (believe it or not?) are better with him around.

Did I mention that I only had him three months ago? No wonder I feel this way! What do you expect, people? I had a baby only three months ago.  I’m pretty sure all of this is normal.  And I know exactly how to fight this thing  (so if you too are in the same boat, take this down):

I’m going to make it a point to be with people and not just ask for prayers on Facebook.  The presence of others helps, especially for an introvert like me whose tendency is to isolate.  It’s the only thing that helps, actually, in addition to the rosary...and beer.  In fact, I started this post wanting to write about how great being with people is when you have a baby, but then, you know…aargh!
.

Faith of our Family: England vs. America

One of the greatest adventures of marrying an English Catholic and raising our hybrid Yank/Brit children in the Faith has been exposing them to the richness found in both the English and American Catholic Churches.  When I studied there, as a Hispanic Californian, I felt happily “at home” with the English Catholics and my husband has fit in pretty well out here in California where the demographics of the Church are very demonstratively not English.

Having lived in each other’s respective Churches, a nice organic overlap between English Catholicism and American Catholicism has arisen in our home.  It surfaces in different, novel ways.

For instance, the “Amen.”  Americans say “Amen” with a long “a” sound. The English say “AH-men.”  While at Oxford, it rubbed off on me in a big way.  I still feel a bit snobby for saying it that way, but I still do it, aware that most of Christendom and Latin America also say it that way.  The kids say both at different times and it’s kind of fun to watch.

Our Lady of Guadalupe and St. Thomas More live in our home.  She, in a framed gold picture, he as a fridge magnet.  But hey, to each according to their station, right?

Every time we attend mass in England we get to practice singing the whole song!  It’s England.  So if a song has four verses, we sing those four verses.  None of this slicing up the closing hymn, stuff.  At least not in any English mass I’ve ever attended.

Over there, abstinence from meat on Fridays is back…in the country where the fish and chips are awesome and we look forward to indulging when we visit.  What a sacrifice.  Go England.

My kids get to witness firsthand that the Church’s liturgy is the same everywhere.  So they have no excuse not to participate no matter where we are.

Their Churches are older… and prettier. Many are currently protestant because of this big To-Do that happened in the 16th century called the Reformation.  But I never miss the chance to go see a big, ancient one whenever we visit and I make sure to remind the kids that once-upon-a-time, they all used to be ours (and more theirs than mine, because they have their father’s genes.)

Our churches are fuller.   Our parish in Santa Clara may be a-typical as parishes go as every Sunday we face hundreds, if not thousands of people, crowding in for mass so that it’s standing room only.  But that, for me, means the church is full.  For my brother in law, who described for me what the “packed” mass at his parish looks like, congregants more or less filling up most of the pews qualifies as “full.”  (Although I hear this is not the case in English parishes with more ethnic minorities.)    And so it is not with any small pride that I beam over the aforementioned hybrid English/American  children filling up a said sparsely “full” pew to capacity when we attend mass there.

They have same freedom of religion and speech problems with their secular state as we do.  So pray for our English brethren, won’t you? It’s far more “post-Christian” over there with only 4% of the population identifying as Christian (and I’m pretty sure my husband’s extended family make up most of the Catholics of southern England anyway).

Their St. Michael prayer is different.   It also sounds way more Englishy. Look it up. I still get confused, and substitution occurs but it really doesn’t matter, right?   If I say ‘restrain’ vs. ‘rebuke’ or “Divine power” vs. “Power of God” it’s all the same meaning, correct (someone help me out with this!)?

They say, “Lord, graciously hear us,” while we command, “Lord, hear our prayer.”  In other words, our prayers of petition stink.  I very much prefer the former, for sure.

Obligation means obligation.  None of this “moving the Holy Day of Obligation to Sunday,” rubbish.  If that day requires mass, then go to mass on that day.  An extra liturgy is offered for working people and it’s up to you to get there, as far as I am aware.

They have J.R.R Tolkien and G.K Chesterton.  I know of no other Catholic American author of the previous century to have written on par with these two English Catholic authors (but then again, I never studied American literature).  You bet my kids will read both men.

We have EWTN.    I know of no English Catholic media outlet that comes close to being like EWTN.  My mother in law loves EWTN and spent her last visit to California watching World Youth Day Rio.    I’ll bet that was something she never imagined herself doing: watching our first Latin American pope celebrate World Youth day in South America while herself vacationing in America.

But, lo, the adventures in our blended English/American Catholic household continue!  It turns out the combination of St. Thomas More and Our Lady of Guadalupe make powerful intercessors.  By the same token, I’m sure in its inevitable that one day both St. Julian of Norwich and Bl. Miguel Pro will also feature prominently among other interesting British/Californian amalgamations of the Faith that will continue cropping up in our home.