How Often Do We Say No?

At times, observing two-year-old behavior grants the most profound insights into humanity in general, doesn't it?

My son who is two has just now fixated on every toddler's favorite word.  Parents, let’s say it in unison: “no.”  It’s a good thing the word ‘no’ doesn’t have a Facebook page, because with how technologically savvy little kids are, it would probably have a million ‘likes’ or more by now.

And so everyday, I am met with a ringing chorus of  “no” to any and all requests.  “Come here!” No!  “Say sorry!” No!  “Eat a cookie!” No! (really?). Thus, my task of transforming my little guy back into a lovely boy again over the course of the next year lies before me. 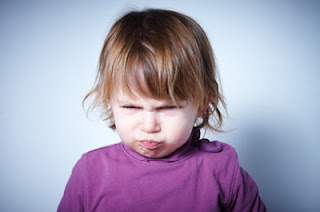 Interestingly, since I’ve started paying more attention to his shenanigans, I've become more observant of grown ups.  Happily, I’ve found is that adults hardly ever say the big n-o.  It seems that our parents did a good job rooting it out of us when we were two!

Here’s the thing though,  we still turn each other down frequently.  However, instead of just refusing outright like a toddler would, we utter non-committal phrases such as, “I’ll get back to you on that,”  “Maybe next time,” or “Maybe when I’m not so busy.”

In many ways it’s not surprising that we do this.  As a word, “no” has a feeling of definiteness and finality to it and, for whatever reason, subconscious residual toddler trauma maybe, that makes us uncomfortable. Try to remember the last time you turned someone down.  Most likely, you didn’t say flat out ‘no.’  That would sound strange.
“Hi! Do you want to get together for a play date?”
“Um…no.”
It just doesn’t happen.  More than likely, you gave a reason, prefaced by a sentiment of regret.  “Oh, I wish I could, but, you know, (insert reason here).”

Coordinating a play date is a tame example.  What about those times someone asked you to do something in which there was really nothing in it for you (watch the kids, cook a meal, give up a weekend for an event).  Chances are you had the same reaction – you humbly declined and you told them why.

And it was probably for a good reason, right?

Now, maybe you don’t do this, but I do, and I've caught myself doing it with God also. I give my watered down negative response to Him and then I give my wonderful reasons why not.

The thing about reasons, is that there are always going to be good, no, great reasons for saying no to God (and to each other, for that matter).

In fact, I’ve never given God or another person a bad reason for being a lame friend. My degree in English Literature assures that my reasons are fantastic and well worded!

I mean, come on, sometimes it’s really just not good timing and I’m busy.  Or my family is in the midst of a transition or on vacation.  Or maybe what God is asking of me is really just not ‘my thing,’ or maybe I’m under the weather, or I’ve had a rough day, year or life. Maybe I’m too hungry or tired, or to preoccupied with getting ready for the holidays or with a project or with schooling my kids.  Or perhaps I’m just not sure if I’m the right person for the job. Or maybe I’ve already done a lot of good in my life and it’s time to give someone else a turn, or maybe I’ve been neglecting my to-do list or my bucket list and want to accomplish a few things first.  Or maybe my spouse won’t support me, or people will judge me or maybe God’s request falls outside of my comfortable cultural sphere. In retrospect, all of reasons I’ve ever given God for why I'm unable to comply with His will have been good, solid reasons.

When was the last time we told someone or God,  “I want to do this because I simply appreciate the value of living in imitation of Christ!”?  Um, never.

The truth is, as good as our reasons are for turning down an opportunity to be charitable, I’m willing to bet that they are never going to be as good the Good we forgoing by not saying yes.  And that Good is capitalized because it is God, it is the chance to grow in His friendship that we are letting go of when we place our lazy human will above His.

And then we're the first ones to wonder why no one does anything extraordinary anymore, aren't we?  If only someone would say yes to God. Hm...if only we set our hearts on being that person.

Of the two servants Jesus spoke of in the Gospel who were commissioned with a task, one refused at first and the other accepted.  But the one who accepted didn’t follow through, while the servant who said no, thought better of it and did it anyway.  Which one will we be?

Even better, though, is the third option and that is to be like Christ himself; to say yes and to follow through with trying our best to do it.  Try it sometime.  Take note: how many times do you say no…without saying no, outright, really?    And more importantly, how often do you actually and genuinely say yes?
Posted by MNichols at 11:46 PM No comments:

The Amazing and Universally Appealing God and Spiderman

Yes, in case you were wondering, the comic book-like title was on purpose.

The reason? Marvel’s superhero Spiderman is back in theaters … again… with a story that’s a remash-up of it’s most recent, er, remash-up.  And for my sweet, un-tainted toddlers, viewing but a single trailer for the film (with their father, I might add) and they were instant causalities to the web-shooting franchise.

Well played, Marvel.  How did you know that the same generation of young adults that watched Toby McGuire’s abs mutate into their own zip code as he played Spiderman during their college years would, a decade later, have children whose limited phonemic vocabulary wouldn’t hinder them from exclaiming ‘Piedooman!” every chance they got?

Oh, believe me, my kids weren’t the only ones sucked (webbed?) in.  We were happy to run out and purchase them Spidey action figures, t-shirts and books. My husband and I have spent time reminiscing about our mutual childhood fascination with the comic book character.  I can still remember the theme song from my favorite Spiderman cartoon.  My mom, this would be my children’s grandma, keep in mind, remembers it with fondness as well.

What is it that makes this blue and red spandex clad, uber-flexible figure, so universally appealing to everyone?

And where does God fit into all of this?

Well, there are some similarities between the whole Spiderman story and the Almighty.

The first is a spider.  Peter Parker owes his literally ‘gripping’ career to a radioactive-spider whose bite enhanced his physique, gave him a his famed danger-detecting sixth “spider” sense, and his trademark web shooting ability.

Concerning God, according to legend, one spider played a significant role in the Nativity story by spinning its silvery web to disguise the birthplace of Christ to the Roman Soldiers. Today some commemorate this story by hanging a spider on their Christmas trees. As a complete spider-phobe myself, that idea creeps me out but the legend itself is still pretty cool.

The second is heroic virtue.  As Spiderman, Parker could have used his powers for evil.  “With great power comes great responsibility,” Aunt Mae to pronounces to both Peter, readers and movie goers throughout the various versions of the story. It is the ultimate moral lesson of Spiderman.

God, of course, is the first one to live the axiom, “With great power, comes great responsibility.” He is powerful and trustworthy in all matters, great and small.  He could end all existence in a milo-second, but in His goodness, and for no other reason, He doesn’t.   And He is the inventor of virtue, if you will, and unmatched in His displays of mercy, the greatest of these being the sacrifice of His Son.

The third is the suit.  Well, not really.  My daughter pointed this out to me.  She ran around telling me that Spiderman was ‘cool,’ to which my Catholic spider-mom reflexes caused me to ask, “Abby, is God cool, too?”   She unflinchingly retorted, “No, mommy. He doesn’t wear a cool suit.” Okay, She stumped me there.

As I thought about it a little more, I realized that one day I will have to tell her about the ‘cool’ armor of God that St. Paul spoke of in Ephesians:

Put on the full armor of God, so that you will be able to stand firm against the schemes of the devil… Stand firm therefore, having girded your loins with truth, and having put on the breastplate of righteousness, and having shod your feet with the preparation of the gospel of peace; in addition to all, taking up the shield of faith with which you will be able to extinguish all the flaming arrows of the evil one. And take the helmet of salvation, and the sword of the Spirit, which is the word of God. (Eph 6: 11, 14-16)

For my kids the ability to shoot webs would certainly complete this divine ensemble.  Now all that remains is for theologians to rename the vices after Spiderman villains where envy is the Green Goblin, pride is Doc Ock etc.

For me and for many, it would seem that God and Spider man do have a shared universal appeal, and overlapping in the stories of both is a spider, keen sense of justice and a suit.

And I haven’t gotten to the best part: one less spider in the world.  The eight legged creepy crawly that got Parker thankfully, met its end never to bite again.  That’s as happy an ending this spider-phobe, Spiderman and God loving mom can ask for.
Posted by MNichols at 2:04 PM No comments: