Just When You are About to Give Up

I think it was after unloading the sixth load from the washing machine and stuffing it along with the fifth one into the large spin dryer, that I realized I was having one of ‘those’ days.  You know, the kind where the fabric of dear ol’ mommy-hood is both heat and stretch tested to see how much it can stand (kind of like the laundry I was subjecting to commercial drying.)

But after a couple of minutes of watching the stuffed hedgehog’s face revolve in circles behind the thick monocle of glass before me, It happened.     That thing that always happens just as you feel you’ve reached your limit and are about to give up.

What is It?  For lack of a better word found in any language, It was God.

That day, God opened the window of grace in that laundromat in two ways.  The first was granting me the wherewithal to realize that if I didn’t retrieve the spinning hedgehog from the dryer, its soft spikes would have fried into crispy ones.  The result would have been the unintended destruction of my husband’s beloved childhood toy which was currently being enjoyed by our children.  “What happened to Hedgehog, mama?  Did you kiww him?” I could imagine my three year old daughter asking me.   Well that wasn’t going to happen, I resolved!  I may have been a casualty of that day, but by Jove, Hedgey wouldn’t be!

So I saved the fat-headed puppet and, in a moment reminiscent of Mel Gibson in The Beaver, I stood there amongst all those nice bystanders in that public place, and began to laugh out loud.

I mean, I had a hedgehog on my hand.  In a laundromat.  After what I had been through in the last twenty four hours, it was just such a perfectly ironic end to my day. 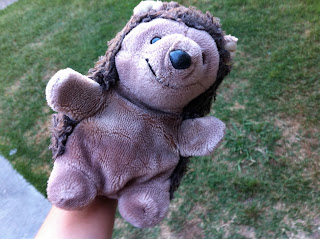 I was the mom who, since the night before, had been caring for a family that was battling a horrible stomach bug.  I, who was running on three hours of sleep, had managed the house, the administration of medicine, my own hygiene and I was now trying to clean the vomit drenched sheets while staring at the marble-black eyes of a puppet.   Part of me wanted to express to my fellow laundromat occupants, “No really!  I’m a mom! This is normal! I’ve got it all under control!”  But I resisted, seeing as how a woman with a puppet trying to reason with strangers probably doesn’t help her case.

So instead I sat down, already feeling a bit more lighthearted about the day.  I threw Hedgehog into the wheeley basket and checked my cell phone.

That’s when It happened for the second time, in the way of adjusting my perspective.  My friend had just announced on Facebook that she had had her baby.  “My son was born! ‘X’ lbs and ‘Y’ ounces!” “Congrats!” I posted on her wall beneath the first picture of her new one.  Just then I realized that where once were feelings of throwing in the towel (or two loads of them) and running away to the nearest Starbucks with a book for the rest of the night leaving my husband to do pajama duty for the kids, there now was humor, and joy and sense that this too shall pass.

Call it God, call it Providence, call it grace, It is what always seems to happen just as things are at their bleakest, tiredest, or most hopeless: it’s God’s built in back-scratch for those that need a moment to remember, relax and regroup.  And it can happen anywhere, in my case it was doing the laundry.

Come to think of it, maybe that’s why I named this blog the way I did.  I’ve discovered that God really is concerned with everyday life.  He’s there in every moment, even with you and your hedgehog, at a laundromat, during any given evening.

Theology of laundry indeed.
Posted by MNichols at 5:50 PM