Bringing Children "to the Sidewalk"

In hardly any other instance is the contrast between the Culture of Life and the Culture of Death more evident than when families bring their children to pray outside an abortion clinic.

In my family’s case, the difference between the two ‘cultures’ is only intensified by the fact that the area’s largest abortion clinic sits right across the street from our YMCA. It’s hard to describe how surreal the close proximity of two such disparate realities actually is.

On any given day, the YMCA holds camps, swimming lessons, child-care and classes that ring of the uplifting sounds of life. There, children laugh, play and learn. It is a place so full of energy that visiting is like plugging yourself into a health-outlet so that you leave more fully alive than when you came.

But not fifty feet away, quite the opposite is happening. Next door, at America’s number one abortion provider, Planned Parenthood, reign the sounds and sights of tears, brokenness, silence and death. There, many children are being denied the opportunity to ever know life outside the womb while children just across the way are experiencing the goodness it can contain.

And so one morning each week, after crafts and fishy-crackers we all board the Nichols mobile and head across the way ‘for a walk’ (that’s all my little progeny really understand at this point). The beauty is that my kids don’t cease being kids on that sidewalk.

I try to imagine the viewpoint from the staff inside the clinic as they sit ‘protected’ by a bullet proof facade, security cameras and metal detectors while just outside their windows stand those very threatening ‘conservatives’ with their strollers and children who are busy playing Ring around the Rosy, hop scotch, tag, sharing snacks, and waving ecstatically to the police who come circle the block at the clinic’s request.

Little else rivals the very compelling irony of this picture: where the so-called champions of ‘quality of life’ have become the purveyors of death, while the supposed opponents of ‘women’s rights’, who happen to mostly be women, along with their children, are busy doing all the living right outside their doorstep.

I tell you, the ‘different sides of the line’ caricature, perpetuated by the media, of the heroic staff of Planned Parenthood sitting harangued by those bully right wingers falls apart once you are actually there. What you see speaks for itself: outside their clinic, children are living, and inside they are dying.

The parking lot alone presents an eerie portrait. It is full of people (mostly minorities) sitting solitary in their cars presumably just waiting for someone to come out of the clinic. It’s quite the opposite of what happens at a hospital, isn’t it? Family and friends generally remain in the hospital waiting rooms to support you during things like surgeries and child birth. Not so at Planned Parenthood. The “support” is only as close as the distance between the building and the parked car (in many cases it’s just a drop-off and pick-up arrangement). Occasionally someone will get out of their vehicle to come talk with us, but for the most part, they stay put.

But they can still hear the kids. It would be hard not to.

There are strong opinions widely circulated about this but I consider bringing the kids to the sidewalk a good, Christian witness, and that’s why I bring them. The rare individual will still verbally abuse us despite their presence, but, this may be a reaction to how the kids, just by being there, drives home the reality of what happens to unborn children behind the high walls of Planned Parenthood. The juxtaposition of their beautiful innocence against the walls of an organization founded on racism and blood money is one that society needs to see and really spend some time contemplating. It is their presence on the sidewalk which reminds us how we all started, and hopefully, how we can be again. 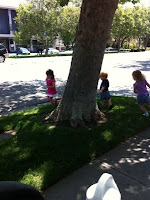